Guidelines for the removal, destruction or lopping of native vegetation were scrutinised in the Inquiry into ecosystem decline in Victoria that was tabled on 2nd December 2021.

DELWP noted in its submission to the Inquiry that native vegetation clearing regulations were reviewed in 2017 and changes adopted through the review process sought to increase protection of sensitive native vegetation, enhance the operation of the guidelines, and increase transparency.

However, despite these changes, DELWP noted that environmental data indicates that native vegetation coverage across Victoria has continued to decline.

(From the inquiry: “Victoria’s ecosystems are currently facing serious decline. Population growth and spread has put pressure on ecosystems, which has led to the degradation and loss of many native species and habitats.”)

(From the inquiry: “We found that there is room for improvement in the native vegetation regulatory framework and how offsetting arrangements are provided for under Commonwealth legislation.”)

The Avoid and Minimise approaches were retained by the Inquiry with a caution, but both still have the same proviso that they “Must provide appropriate evidence to show that no options exist to avoid native vegetation removal that will not undermine the objectives of the proposed use or development.”

(From the inquiry: “We find that many of the legislative tools available under
Victorian legislation are under utilised or poorly implemented, and that some legislative provisions are overly complex, overlapping, or outdated.”)

Could it be that one of the main causes of biodiversity loss can be found here, and the reason native vegetation across Victoria has continued to decline is because this attitude and wording might provide a loophole?

(From the inquiry: “Finding 17: Offsetting arrangements provided for by the EPBC Act 1999 are contributing to ecosystem decline.”)

What might change if this very negative wording were to be reversed to become “that no options exist to avoid native vegetation removal that will not undermine the objectives of environmental and biodiversity protection and care?”

Atlas Cedars are members of the pine family and are native to Algeria and Morocco in North Africa. They form forests in the Atlas and Rif mountains where they provide habitat for the Barbary Macaque. In their home range, Atlas Cedars are disappearing due to land clearing and timber harvesting. 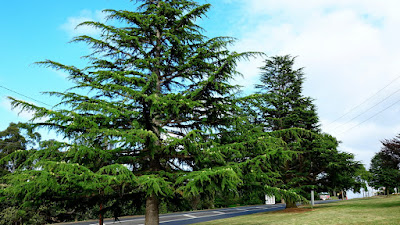 The species produces an aromatic oil that is a natural insect repellent. The timber is sometimes sourced for furniture-making. 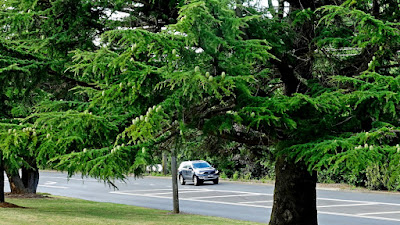 The Atlas Cedar is commonly cultivated as an ornamental tree. Its pleasing, pyramid, Christmas tree shape makes it a popular parkland tree in urban situations. At this time of year in the Southern Hemisphere, the pale-coloured conifer cones add to the Christmas tree effect as they protrude vertically like decorations. 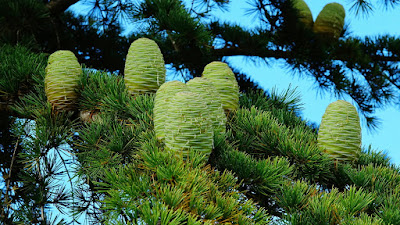 Drouin has two Atlas Cedars in Morton Park at the intersection of Buln Buln and Hopetoun Rds and a single tree in Hearn Park in Hearn St, (and there may be others?). The trees in Morton Park were planted by Buln Buln Shire, circa 1960.

Posted by Gouldiae at 4:36 PM No comments:

The Australian Pipit is an open habitat bird that can occupy a wide range of grassland, farmland and wasteland locations. It is mostly sedentary and stays in the same place for several seasons.

The camouflage and shy nature of the Pipit means it is not often seen although it is described in some references as a common and abundant bird. The first sighting is usually when the bird is accidentally flushed. It generally flies off close to the ground for a short distance, lands, wags its tail up and down (the Pipit is related to the Wagtail), and then seems to completely disappear as it merges into its surroundings.

Australian Pipits are very terrestrial. They feed on ground-level insects and build their nest in a simple depression in the ground.

Some researchers suggest the Pipit is in decline due to improved pasture, pesticides, predation and urbanization.

For how much longer?

A new sub-division in the location will certainly impact on the bird’s habitat. It will be interesting to see if the bird survey in April 2022 records a Pipit in Drouin. (An as yet unidentified Sun-orchid was recorded in the same location on the same day last month) 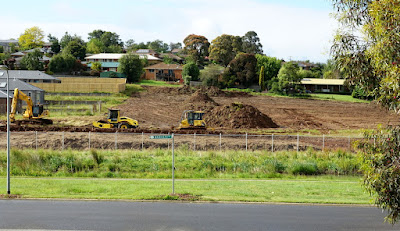 Like the Pipit, the time to move on is approaching?

Posted by Gouldiae at 8:16 AM No comments: